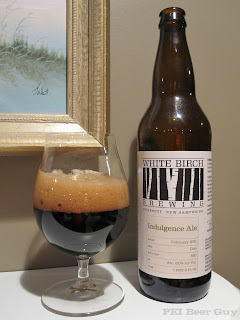 This is my first brew from White Birch Brewing in Hooksett, New Hampshire. This brew was bottled almost a year ago, in Feb. '11. It's numbered Batch One, with a bottle count of 840. The alcohol content is 8%.

Holy crap is this stuff dark. More than that, holy crap is the head ever dark. And fast-forming. And fast-falling. And loud as it does it! It's like the fizz on top of a glass of pop, dissolving in slightly-slower motion. Within a minute or so, just a thin layer is left on top. There's no real lacing to speak of.

It's not hard to tell that this black ale has a lot of chocolate malt in it - the aroma is almost all dark chocolate. You can also smell something like coffee or espresso, and something else sweet & fruity (think blackberries or really ripe cherries).

I kind of like the flavour - a mix of chocolate and coffee with a bit of funk. It's like a dark Belgian in some ways (beer, I mean... a dark Belgian beer), but is mostly like an imperial stout or porter. There is a light, woody character to it in its finish, though, that I don't like. Nice exhale and pretty good aftertaste, though. There's something getting in the way of the flavour's good points, however...

The carbonation of this is just ridiculous - possibly the highest-carbonated beer I've ever had. It's an in-your-mouth fizz bomb. Lots of burps to be had here - like after every sip or so. If this thing was much flatter, it'd be a different and better beer. After my first couple of sips, I pondered shaking the bottle up before I topped the glass up... I decided to swirl the bejeezus out of it in my glass instead and try it again. Much better now! The carbonation isn't accentuating the unsavoury traits as it was in the beginning. The body is actually full / heavy, and smooth if given a (de-fizzed) chance. The finish is sticky & chewy.

Overall, I'd say I was a bit disappointed. Lots of promise, though. With one major tweak (the carbonation) and some minor ones in other places, it could be a much better (and very good) beer. Right now, it ain't that great - no great indulgence.
American Strong Ale White Birch Brewing