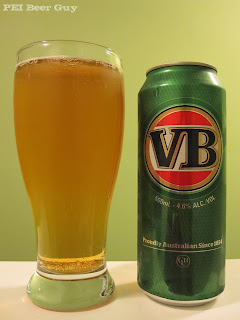 I had this one over a year ago... wasn't exactly rushing to post it.

This beer pours a deep, mellow gold. There are lots of pop-like bubbles which almost instantly turns into one of the flattest-looking, headless beers I have ever had.

The smell ain't great. There's a hint of "oily garage" in there. It smells almost like a cider, but stale and a bit metallic.

It tastes more like a cider or apple juice, too... a bit fruity. The aftertaste is a bit grassy... lingering and rather gross.

The carbonation is a bit sharp at first. A little watery and oily in the finish. It's only a bit bitter.

Overall, in case you didn't guess it yet, avoid this one. It has to be one of the five or ten worst beers I have ever had.
Carlton and United Breweries Lager Ltd.