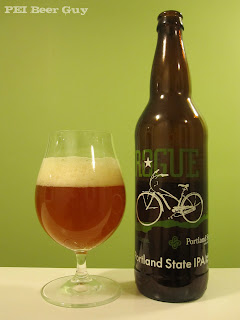 Coming in a fancy shmancy wooden box with a burned-in label, and a matching T-shirt, is this Portland State IPA from Oregon's Rogue Brewery. On the bottle, they claim that this beer is an all-local effort, having even the bottle made locally. It's somewhat ironic that they delivered this to my door - 6082km away. But, hey... I'm not complaining.

At first, this beer is super-clear. There are gobs of sediment in the bottom, though, that make it a bit cloudier as this brownish-amber brew wears on. It has a tall, off-white head that has large bubbles in it forming almost right away, taking their time before popping.

The nose? Hops - a mix of pleasant citrus and something that reminds me of my cat's litter... really, something rather pee-like. It's not enough to stop you in your tracks, but it's there.

The flavour? Whoa. That was unexpected. It's really orange & tangerine-y. I think the Maris Otter malt is playing a nice role in balancing things out. There's some caramel / light roast notes in there, too. It's different. There's something "luxurious" about the malt profile of it - like maple syrup without the maple, if that makes any sense (no, not just syrup).

The carbonation's a bit of a tingle on the middle of the tongue. The body's on the lighter side of medium, with a slightly sticky finish.