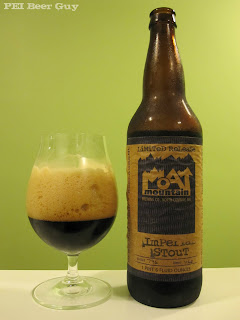 This was my first brew from Moat Mountain Smokehouse & Brewing Company in New Hampshire. This 9% beer is #796 of a run of 1162.

This stout pours a very dark brown. The head on it ends up being just about the most impressive I have seen - very tall, slow to fall, rich, creamy, dense, lumpy, and brown. Lacing follows the head all the way down.

It smells of dark chocolate, some raspberry, and maybe a bit of vanilla. It's sweet and also a little sharp. There's a hint of alcohol in the aroma... almost like a little... bourbon?

In the flavour is coffee. It's also a bit tart and fruity. It's a bit like an oatmeal stout in flavour as well. There isn't much chocolate in the flavour, but there is some slight woodiness.

It has a tangy feel on the sides of the tongue. The body's on the full side of medium, I guess, but - somehow - has a finish that is slightly watery.

The whole bottle in one sitting was a bit much - it was pretty rich, and the last couple of sips were rather sharp. In its defense, I had a full stomach when I had it, though. Overall, a fairly tasty brew, but I wouldn't rank it on the top of my imp. stout list.
Imperial Stout Moat Mountain