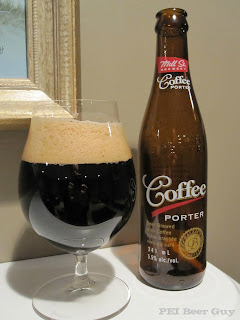 Mill Street's been a bit hit-or-miss with me in the last year. Some of their beers have been good, and a couple have been at least sub-par. I'm glad to see two different mixed six-packs from them in the last year (even though the brews inside are inconsistent). This is my first full bottle of a beer I've only sampled before.

This one poured nice and dark as it should, and had a nice tall head at first. By the time I got to drink it, it had lowered to a creamy-looking brown skim. It leaves frequent, random, small spots of lacing.

In those nose - surprise, surprise - is coffee, maybe just a hint of chocolate, and what smells like a bit of rye bread.

The flavour is - surprise, surprise - mostly coffee (kind of like choco-covered espresso beans), too. There is also some brightness / fruitiness, which is common in a lot of porters. It might be a bit high here, but it's what keeps it from coming off as a coffee stout, I suppose.

The carb was a bit brighter than expected - maybe a bit brighter than it should be, but it matches a bright sweetness in the flavour. I remember the sample I had last month as being somewhat watery. I didn't find that with this one. The body is on the full side of medium, actually. The finish is somewhat bitter and sticky.

This one was about as good as I thought it would originally be. Nice feel (although a bit too bright for me here) and flavour. Pretty solid.
Mill Street Brewery porter