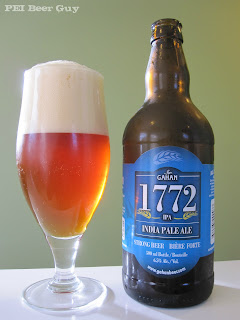 I have had this brew a few times since (and including) launch day (and even an unfinished sample before). I've been meaning to post about it before now, but... things have been busy - masters, work, and home life. So, now that I have had time to think on it... without further adieu...

First off, why 1772? My guess (just from the date and ship's image on the packaging) is that it's connected to the landing date of the Alexander, a boat that brought some 210 passengers (mostly or all Scottish Catholics) to PEI. I'm thinking the Acadian folks on PEI don't care for the name... 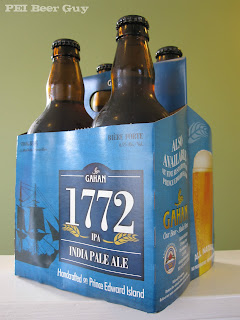 This bottled incarnation of Gahan's IPA has lots of sticky, pale-amber head that lingers for a while before leaving some lumpy, sticky lacing on the glass. It is still clearer than the pub's version (which should change soon, as they're working on product consistency). The cloudy (and best-ever, from August) version of it seen below is a little cloudier than what you get at the pub now. The beer is a deep, clear rose-amber.

There are nice aromas of grapefruit and some other citrus, a bit of evergreen, and some slight malt / caramel notes.

In the flavour is some nice pith and grapefruit. It's fairly well-rounded, albeit a bit green / grassy. There is some cracker / bread / grain to it. It has a "summer ale" slant to it in that there are also ever-so-slight hints of lemon & pepper. 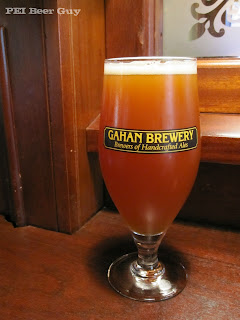 The finish is fairly bitter and a bit grassy, as well as slightly sticky. The body is medium, and the carbonation is pretty light (just right). There are some hops in the burps, which is nice - sounds gross, but those that understand know what I'm talking about. The 6.5% is apparently the strongest beer that can be brewed legally on PEI (let's hope that changes). I actually think it has a bit more of a kick than 6.5%... I wonder if it's just labelled 6.5% and it's actually a bit higher (there is a 1.5% "fudge factor" allowed). Either way, I'd like it to have a bit more "heft" than 6.5%.

Overall, I am really glad this beer has made it to the shelves of our stores here. It's the first IPA available in our stores, believe it or not - therefore, a bit of a triumph for IPA-lovin' people like me. It is a respectable IPA - not the best I have had, but it can at least stand shoulder-to-shoulder somewhere in the middle of the pack with other Canadian IPA's available on the market - really, for their first go at this, that's saying something for the Gahan folks. Keep up the progression, gents!