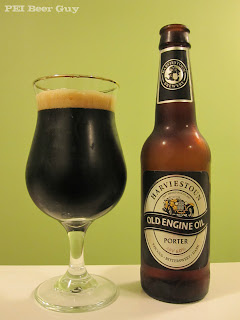 With a name like this, I expected this "lubricious" porter to be jet black right out of the bottle. It's not, but it's pretty darn black in the glass. There's some nice cascading-up action from the carbonation. The head is a finger or so tall, dark, and creamy. It falls fairly fast, though. The lacing is, oddly enough, very lace-like.

In the smell is mostly roasted barley, some faint coffee, and just a hint of some dark, bittersweet chocolate.

The flavour has a bit of a smokiness that was a bit unexpected. There is also something a bit sweet as well as metallic about it that throws the balance of it off. I think it's coming from an odd combination of a slight citrus / fruit tang with the bitter feel and roasted flavour & exhale. It's like "simulated metallic", coming from the other notes not playing the way they should (what did I expect, I suppose... I'm drinking oil).

It is smooth, viscous, and lubricious, as advertised. The carbonation is just a faint tickle. The finish is slick & sticky. A bit of that metallic flavour & feel sticks around, too, unfortunately.

I was quite looking forward to this and must say I was a little disappointed. It's a good beer - don't get me wrong. I just didn't think it quite measured up to what I (and common opinion) had thought it would be. That being said, I'd gladly try again in the future.
Harviestoun Brewery porter