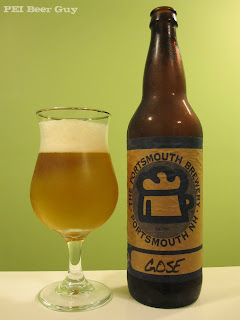 This is my first-ever gose, a fairly uncommon style of beer from Leipzig, Germany. It is made from a combo of approximately 40% barley malt and 60% wheat malt. A top-fermenting beer, it is seasoned with coriander and salt. Only a few breweries in North America are starting to tinker with this old, almost-forgotten style.

This brew has a surprisingly tall head, that looks quite white and creamy. It reduces fairly quickly, and most of the time the beer has just a few bubbles on top with a slim ring of foam. The beer is very clear and yellow, like an apple cider.

There are smells of wheat, and a bit of smoke, actually... which could be the salt playing tricks / giving it that slant. There are also some hints of fruit, similar to some triples.

The flavour is dominated by a fresh weissbier tang - a zippy kick of citrus (lemon). The salt comes into play here, again, too, with that smoky / salty tinge. It's a total dichotomy in the mouth... the fresh, light weissbier with this exhale and extra flavour of something darker and almost smoke-like... the combination of juxtaposed flavours puts me in mind of some other triples / saisons / strong Belgian ales.

The carbonation is ample without being too prickly. It's on the high side of a light mouthfeel, and a slightly viscous finish has a bit of stickiness. There is a tangy feel on the sides of the tongue, and some lightly salty burps... near the end, salt grows and plays on the tongue a bit more, too

Overall, a fairly cool style, even if it isn't strikingly different from others I am already familiar with... I'd liken it to Dominus Vobiscum's Triple with a bit of salt.