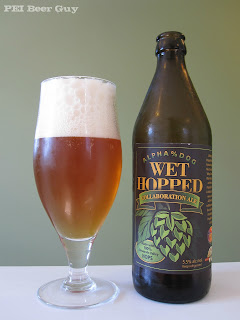 This is the second year that Sea Level and Propeller have put their skills together to release this wet-hopped IPA (using Cascade and Willamette hops from the Annapolis Valley). Last year, I missed out. This year, not so much, thanks to the understrait beer railroad (ie, Chris).

The head reminds me of Sea Level's brews right off the bat, but this one has more large pockets form in it, causing it to pull away from the sides and leave a moraine of creamy suds in the middle. Some sticky head clings to the glass. It's a fairly pale IPA. It has some deeper orangeness to it in its shadows, but, overall, it's more of a light apricot colour (maybe around a seven on the SRM scale).

I rather expected this brew (for whatever reason... maybe my recent Seal Level "luck") to be a bit of a lightweight. It's got a nice, hoppy smell, though, with some malt sweetness thrown in - like a mix of barley toy candy & oranges.

The flavour throws me off a bit - it's got this earth-pepper-grass-straw-wood thing going on that doesn't match the scent at all. There is some sweetness to it... like a muted barley toy note in there, some oats, and maybe some citrus, but it's a stretch. Might even be some wet dog... my God, I hope that's not where part of the title came from...

The carb is a little flat, and the bitterness is pretty high. The body is medium, and the finish bitter & a little slick.

I was looking forward to this one, but I can't say I'd be too gung-ho to pick it up again. The flavour isn't that great, leaving mostly just an impression of some oats and a not-too-likeable earthy bitterness.
India Pale Ale Propeller Brewery Sea Level Brewing Company