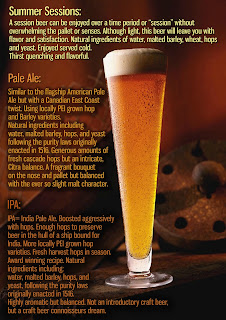 At this weekend's first annual PEI Beer Festival, PEI's new brewery, Barnone, unveiled their first three beers and their brand / company in general. Available were samples of their Summer Sessions, Pale Ale, and IPA. In the text-heavy picture you can read about each in more detail. What did I think of them? Well, I was fortunate enough to get two or three samples of each, and here's what I thought:

Summer Sessions
A pretty refreshing summer beer, and not really a lightweight for the style. In the aroma were some hops and wheat. The flavour is bright, a bit bready, and has almost a tang to it. The hops in this one make it a bit more bitter than expected. The body is pretty much medium (fuller-feeling than expected, too), with some tingly carbonation. The finish was fairly bitter and quite dry. A nice beer.

The first thing I wrote down for this one was "Yes". The middle beer in the pic below was quite hoppy in its aroma and taste - mostly citrus / pith (grapefruit, especially). There was also some nice malt in there to balance it out, in the form of a light caramel flavour. The body on this one was medium, with lighter carbonation than the Summer Sessions. The finish was also very dry here, but also had a bit of stickiness. I thought this was a very well-rounded, flavourful, drinkable beer. I thought it was the best one of their lineup and the festival as well, bar none (sorry, couldn't help it).

Barnone IPA
This brew was just a tad hoppier than the pale ale in aroma. Although a little more grapefruity in flavour, and a bit in aroma, the nose was arguably more floral - almost rose-like (could be that Rose Valley influence?). I found the medium body to feel a bit lighter than the pale ale, actually, but, oddly, it was definitely stickier at the same time. It was bitter, more than the other two, but not overly so - still very quaffable. A quality IPA, to be sure.