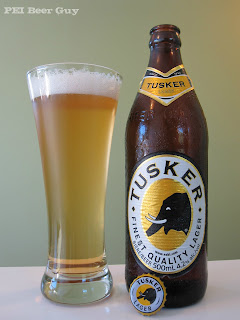 Tusker is my first beer from Kenya (or Africa, period, I think). It has been brewed since 1922, and is named for the elephant that killed one of the brewery's founders (just like the step-mom who almost killed good beer in the US, Anheuser-Busch). I appreciate that the bottle has "BEER ONLY" embossed on the glass so that I don't mistake it as a bottle of elephant repellent.

Without a doubt, this is one of the palest beers I have ever poured or drank. Right out of the bottle's mouth, you can tell how pale and clear it is. There is a couple of fingers of head that come with the pour, and a skim of creamy head remains once it lowers. It also leaves solid lacing all the way down.

In the nose are honey, grass, and just hints of cardboard and sulfur (the undesirable traits magnify a bit as it warms - some malt aromas actually come out as well).

The taste is pretty fresh (despite being past its best before date - just to be honest) and refreshing actually. It is a repeat of the nose and appearance in every sense. It's light, a bit sweet, and has hints of things you'd like to leave out.

The mouthfeel is crisp, light, and rather watery in every way without feeling too cheap. It just feels like a beer that should be drank on a hot day like today.

Overall, a decent and crisp lager.