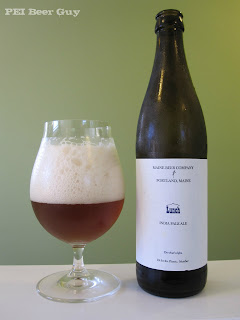 The head on this is massive! At first pour, it came out nearly 80% head or something ridonculous like that. It's an off-white colour, fairly dense, and creamy. As it starts to lower, larger bubbles start to form in the middle, while the perimeter actually goes down ahead of it. It takes several minutes for it to lower to the surface of the beer, and it leaves some thick, sticky lacing on the glass. The beer itself is nice & clear ('til the sediment gets stirred up), and is of a dark copper colour.

There is something about IPA's that just intoxicates me, and it really starts with (and is probably mostly based on) the smell. This one smells pretty fantastic... it's alllll hops. Pine. Grapefruit. Orange. I could just sit here, smell it, never sip it, and be totally happy (well, almost).

Taste-wise, it's a bit lighter than the smell. That's what really makes this one a beaut, though - it's an easy-drinking (though strong-smelling), approachable IPA that just begs to be imbibed in large amounts... and allows you to do so because it's so well-balanced and doesn't smack you across the face with bitterness or anything else (not that that's a bad thing, necessarily). There's something about the bitterness or 7% alcohol , though that gives at least the idea that it's a little hot / high in alcohol. No big deal, though. There's a nice malt backbone to this, too, but who are we kidding... nobody drinks IPA's for the malt notes.

In terms of how it feels, there is the aforementioned mid-range bitterness, and maybe a bit of alcohol kick. It's not overly resinous or slick, but it does have a smooth, medium body. The finish is the bitter pith notes, and is eventually a bit dry.

Overall, a great IPA - so glad I got to have it and have it fresh. I may have to hit that Maine Beer Trail soon!