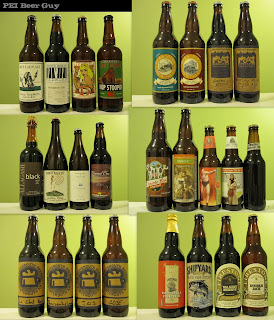 This month saw the completion of my first true beer trade, and I must say it was quite fruitful.

A fellow BA member, Anthony (ajcormier) contacted me about beer on PEI and whether or not we could do a US-Canada beer trade. Luckily, I was going to be in Halifax between then and the trade (since there's nothing really to trade with from here). After a couple / few months, I finally got to meet Anthony and his Mrs. (a great couple), and trade the stash of beer I had in my cellar. What you see in the pic is what I got, and what you can expect to see here eventually (three have already been imbibed and two have already been reviewed):