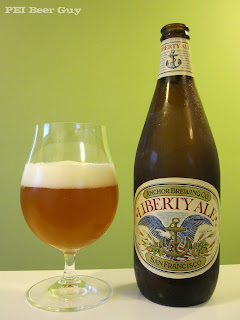 It was 28 degrees outside today (which, due to our humidity, would be like 140 to you Yankees), which makes it the perfect evening to pop open an American pale ale... the cleaner, hoppier, less malty version of an IPA.

This beer pours a crystal-clear, pale apricot colour, with a finger or two's worth of head that reduces to a nearly-uniform film on top after a few minutes. There is only the odd spot of lacing to it.

The nose on this one is pretty great (I'm so glad this is a large bottle): grapefruit, pine, some orange... lemon... I think this is the best-smelling beer I've had in over two months. As it warms, flower and pine notes start to strengthen.

The flavour doesn't quite live up to the olfactory hype. It's still a good beer, flavour-wise - it just doesn't offer up what the nose does. In the flavour is mostly the orange, some pith, a bit of that other citrus (mainly lemon), and some second-fiddle-playing malt undertones.

The bitterness is subtle at first, but it does build as the bottle goes on. The finish is a bit sticky (especially up the middle), but mostly dry. The body is just on the light side of medium.

At first smell it was love, and at first taste it was "meh". After the whole bottle, though, I was pretty pleased with the whole package & experience. I wouldn't hesitate picking one of these up again if I had the chance.
American Pale Ale Anchor Brewing Company India Pale Ale