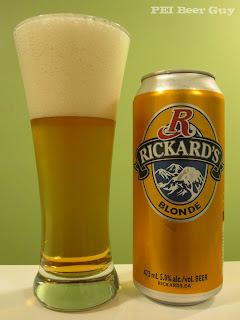 Being a new mass-market beer, this one is most likely going to get panned by some craft beer enthusiasts before they even try it. So... let's forget that this Blonde is not really a blonde... it's a pilsner. Let's not focus on the fact that, although it's billed as "...indeed the one beer in our Rickard's portfolio which includes the highest concentration of hops," there is no IBU number for it or the names of the four hops used. It doesn't matter, really, how much / many hops were used in this beer - it just looks a bit bad on Rickard's to say that this pretty plain brew is the hoppiest one they have. It's not this beer's fault. Let's just take this beer as it is and see if it's any good.

This one pours crystal clear (as a pilsner should), and provides scads of head at the beginning - maybe a bit much for the style. The retention isn't too bad, actually, and there is consistent, spotty lacing.

I don't get much or any of the advertised floral notes in the aroma. I smell more of a wheat/grass combo, perhaps with a bit of that characteristic sulfuric "lager smell".

The taste is a bit acidic, fruity, and sweet. None of those traits are overpowering, but it's pretty strong in those respects for a local pilsner.

The carbonation level is medium, and the finish is dry, overall.

Overall, a decent beer. Good enough to keep a couple in the fridge for a hot summer day. Not good enough to really engage you and pique your interest as you drink it; at least it's pretty refreshing and you won't feel bad if you decide to sacrifice one to cook with.
blonde pilsner Rickard's