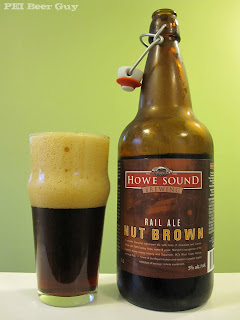 This, my fourth beer from the Howe Sound Brewing Company pours a clear and fairly dark brown that is brighter and lighter on the edges. It has lots of head, which only lasts a couple of minutes. It leaves a somewhat pop-like skim of bubbles on top.
At first, it does have a bit of black licorice in the smell, even more than the advertised notes of dark chocolate (which do come out a bit more as it warms). The aroma's stronger notes are of molasses and rye bread.
The beginning of each sip has a smooth chocolate flavour - then transforms into full-on rye bread territory. It's like the liquefied version of a heavy, hearty bread overall - without being heavy, if that makes sense. I only pick up a relatively minor amount of non-specific nuttiness.
The feel of it is quite light, and it has a rather sweet and clean finish. It's somewhat refreshing and goes down easy - it'd be no problem to put away a good little amount of this in one sitting. The carbonation is bright, but subtle. It tickles the tongue just enough before it evaporates towards the roof of your mouth.
Overall - a nice, easy-drinking, pretty-tasty, lighter-than-expected, refreshing brown ale. Not extremely memorable, but a quality beer nonetheless.
brown ale Howe Sound Brewing nut brown