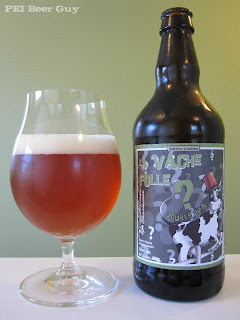 I thought this one might be a bit of fun, in that it's a bit of a challenge in guessing what single hop was used to brew this double IPA / Imperial IPA from the Microbrasserie Charlevoix (nice to see someone still has a Geocities site). Also, I just happen to like hoppy beers / IPA's, so why not give it a shot?
The beer pours a very clear tangerine colour... kind of a deep, mellow, orange Jell-O. The head is nice, albeit modest, but it has great retention and leaves lots of lacing.
The somewhat subtle, bright smell reminds me a bit of some triples or even a saison or two. The aroma is built on stronger notes of roasted pineapple, orange, and smaller hints of things like lychee fruit. There is a bit of smell from the malt, too - some sweet / lightly-roasted components. As it warms, a bit of the alcohol comes out.
The flavour is not very fruity or hoppy. Neither is the smell, really, but there is less here than what is in the aroma. The flavour of this just fair. There's a bit of alcohol in it, which is too bad (considering the style and that it's only 8%). The flavours (and feel) don't really mesh that well. The overall impression is a muted orange-pineapple that goes into more of a sweet, malty beer - almost like a red or "medium-strength" amber ale.
The feel is a little off-putting. It's a bit alcoholic / harsh... like when Ralph Wiggum "eated the purple berries". It's not a taste or feel you should want or find in a drinkable beer. The body is a solid medium, with a bit of a sticky finish.
Overall? Meh. It's not bad, but it's not great. My favourite sensation from the beer was from the burps (not uncommon in an IPA / double IPA, really). They smelled / tasted like the whole beer should have - mellow, smooth, fruity. They were pretty nice, really. Oh well. Maybe the next one in the series will be as good as the others have supposedly been.
Imperial IPA La Vache Folle Microbrasserie Charlevoix