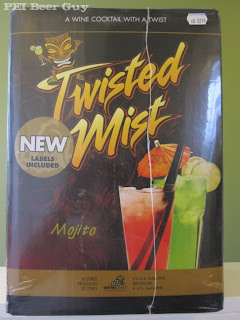 The summer season is approaching, and it's nice to have a little variety in terms of drink options for those warm days - if not for myself, but for visitors, too. Now, you may not know this, but, as much as I love beer, I am a bit of a rum fan (among other drinks, too). In the summer, I have been known to have the odd mojito out on the deck. So, it was a bit of a nice surprise when a rep. from winexpert.com contacted me and offered me the chance to brew one of their new Twisted Mist products. Now, despite what Mr. Loupelle said at the local brew shop - that the two margarita flavours outsell the mojito five-or-six-to-one - I knew I wanted to try the mojito kit. I wondered, "How well will a wine kit simulate a good, rummy mojito?"
Well, today, I finally got a bit of time to start the four-week brewing process. The instructions on this $83, 30-bottle-making kit look pretty good, but have a couple of unclear spots. For one, the packet that should be #4 by its contents is
labelled as #5 in my kit. Also, there are two packs of 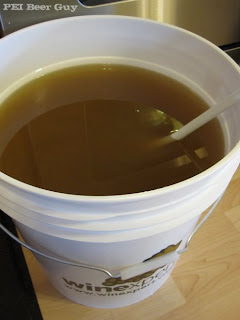 unlabelled liquid that must be the "F" ones as referred to in the guide... I'm assuming this, as there is no "F" on either one. Also, there are two yeast packets (odd). According to the instructions, there's something about putting every multiple of an item into the mix when its name gets brought up in the instructions. The "F" pack / bag I can kind of see (although, won't that really boost my volume? We'll see, I guess), but two yeasts? I have my doubts, but the instructions say (but not explicitly for any one item) to add all multiples/extras, so... in they went tonight. Well... they will, once the mix cools down (takes hours when you don't have a chiller / heat sink, and I don't want to heat it up again).
Ten more days, and then it's phase two!
home brew Rum Twisted Mist wine