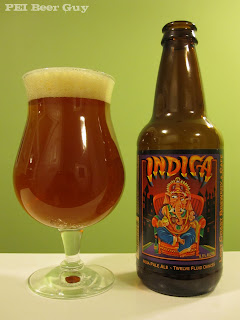 Another IPA for my IPA mini-week, before I wrap up with a "special report" on Sunday (should be a doozy!).
I poured this one into my Gavroche tulip - hey, it's a nice glass, and it's great for drinking from.
This IPA is darker than I thought it would be. It is a rich, bright, orange. It is clear, with a few flecks in it. There is a finger or more of head; I had to wait for it to lower to finish pouring it, but the wait wasn't long. The head became creamy and dimpled on top, but, again, it didn't last long. There is lots of lacing.
In the smell is pineapple, orange, grapefruit, as well as some toffee and caramel which mellows it out a bit (which I'd rather not happen). It's not as intense as I would like it to be.
The taste reminds me a lot of other recent IPA's I have had in some ways. A bit of alcohol is identifiable, which is too bad. The taste isn't quite as bright as the smell, but both are mostly the same otherwise.
The carbonation feels a little sharp going in, but settles quickly. The body and bitterness are both medium. Even though the abv is only 6.5%, it feels a bit like a beer with a higher alcoholic content.
Overall, it's good... but just.
India Pale Ale Lost Coast