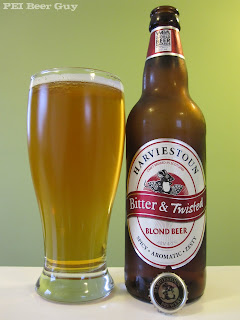 This blond beer, also referred to as an English IPA (more of a low-abv American slant thereof, I think), is my first beer from Scotland's Harviestoun Brewery.

The colour, as you can see, is a somewhat deep, clear yellow. Only a little head forms, and doesn't stay for long, leaving only a few spots of webby lacing on the glass.

When I popped the cap, inside the bottle, it smelled like a spicy wheat ale - it had a peppery character, and smelled of wheat. After I poured it into the glass and got things stirred up, its pale ale traits came through moreso - citrus like grapefruit and lemon, with just a hint of that spice, whatever it is (not tasted it yet), and no strong malt notes. Most everything about it is subtle, but it smells bright and fresh enough.

Taste-wise, it's good. I'm not won over by it, but I am not put off or really disappointed, either. Lemon and grass seem to be at the forefront, literally at the leading edge of the tongue (and a bit at the back edges later). It almost has a "stale hop" taste to it, but I think it could be better described as a mix of something like a bit of citrus pith and lychee fruit. It's just that the bitterness / pith / fruitiness is so much more subtle than a strong IPA or even a more hop-forward pale ale, that this perhaps seems more muted or subdued than you may expect. There is some spice to it, but it is so subtle, that if you're not thinking about it, it's pretty much not there.

In terms of how it feels in the mouth, the carbonation is pretty crisp, its body is rather on the heavy side of light, actually - almost medium, and the finish is a bit sticky. In terms of bitterness, I find it just pleasantly / lightly bitter.

Overall, a pretty solid / decent ale. It is not terribly memorable, but its traits are subtle enough that it would work well in many situations (hot day, with food, having a few at a pub). Worth a try.
blonde Harviestoun Brewery India Pale Ale