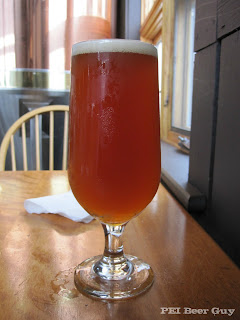 As soon as Greg Nash, brewer at The Hart & Thistle, mentioned on his blog that this beer was being released on May 27th, I was elated. I just happened to be in Halifax that day for something unrelated, and, what's more, a foodie friend of mine was in town for a convention to share the experience with my Mrs. and I.
For more information on the beer, you can check out Nash's blog. For just a bit of information, though, it is most likely the hoppiest beer ever produced in Canada, and one of the biggest (if not the biggest... I think one by Mikkeller may be the only one to beat it... correct me if I'm wrong, please) the world has ever seen, due to "being mash-hopped, first-wort-hopped, bitter-hopped, flavour-hopped, aroma-hopped, hop-bursted and dry-hopped again and again". How hoppy and bitter was it, on an IBU (bitterness) scale of 100, was a theoretical bitterness of 1066 units. From 18.5 pounds of hops per barrel. Holy crap.
The bright orange colour and creamy head are the first things you notice... that colour of a great IPA or Imperial IPA like this one just hints at the flavours every hop-head loves. There wasn't much lacing to it.
I literally could have smelled this all night long. I mentioned at the table a couple of time that I wanted to take some of it home in some kind of container and use it like smelling salts. It had aromas of grapefruit, pith, nectarine, peach, and was a bit flowery. It had a bit of malty mellowness to round / smooth it out, but this one was all about the citrusy hops. As it warmed, the maltier notes started to emerge a bit more.
The next thing you notice with this one is the feel. It's a bit thick, sticky, and resinous. By the second or third sip, I realized that it wasn't the carbonation that was tingling my tongue, it was the bitterness! The carbonation was fine, and not really in play in terms of what you noticed. The bitterness literally set the tip of my tongue tingling at first touch, and then the rest of the tongue (especially the sides) would go all tingly once the beer was in. The tingliness was akin to when your sister uses five times the amount of garlic she should on a bruschetta, or when your foot's waking up. Eventually, it does dry the tongue out a bit. Despite being very bitter, it was still very drinkable... at its own pace.
The flavour was a bit sweet, and really nice. Essentially, most notes from the aroma were echoed in the flavour, which showed no signs of its 9.2% alcohol content.
All in all, an unforgettable beer - an experience, mostly for the aromas and feel. It's like the addictive properties of loud music - it's bright, fun, a bit bold, and potentially harmful in large amounts, but it's just so good and hard to resist.
Hart and Thistle Imperial IPA Nash