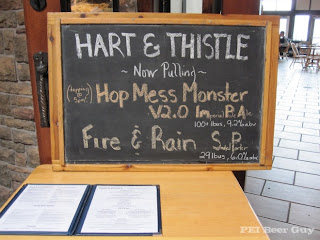 What a great way to cap off a week of reviews of IPA's I have had from the past few months - a just-tapped (not even served for six hours yet, as I write this) MONSTER of an Imperial IPA and a solid smoked porter to serve as its appetizer.

Without giving the whole thing away, let's just say that the Hop Mess Monster V2.0 is just about the best beer I have ever had - maybe the best. Yeah, the more I think of it, I think it was...
It was so good, a leaving patron thanked me for the beer as I was talking to Greg Nash, the brewer (clearly, this is powerful stuff).

I wonder if the Hart & Thistle does breakfast... I could go for visit 3.0.