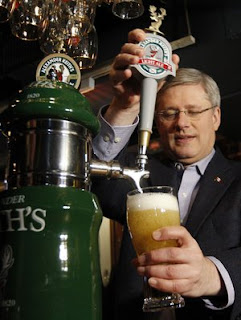 A few days ago, TAPS - The Beer Magazine posted a wee picture contest on their Facebook wall. The object was to come up with a caption for a picture from Stephen Harper's visit to Nova Scotia last week. The best caption would earn the winner a one-year subscription to TAPS. Of course, since I'm posting about it, you probably figured out that I won.
The winning caption?
"With an inventive effort, Harper finds a way to technically say he has 'pulled a head' early in the election."
Now, your challenge: what would you have said?
TAPS