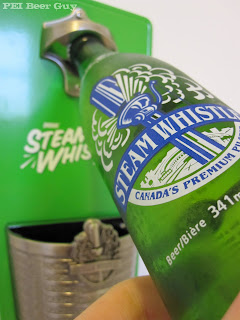 Steam Whistle's motto is to "Do one thing really, really well." In today's flavour-of-the-day beer market (among the craft beer converted... and that's not a bad thing), that's rather daring... or smart. Considering most beer drinkers haven't had that craft epiphany yet, focusing on an approachable beer, done "really, really well" is probably pretty smart. A couple of years ago, I had my first (and only) Steam Whistle in a can - I do remember thinking it was pretty good. Now, I am faced with Steam Whistle in a bottle, to give it an "official" taste test.
It pours a very clear, pale, golden colour. There is some white head, but not a lot of it. Most of what I got out of the pour has already disappeared, before I can even taste it.
Smell-wise, it's a pretty standard pilsner smell. I must admit
it is, for me, usually not a very "exciting" style, as there
aren't many significant / daring positive differences between one pilsner and another. On the plus side of things, it does have a fruity / hoppy character to it that I do enjoy in this style. Also in the smell is some straw / grass, and some faint bread notes. Thankfully, this green-bottled pilsner doesn't come with a sulfur / skunk smell. 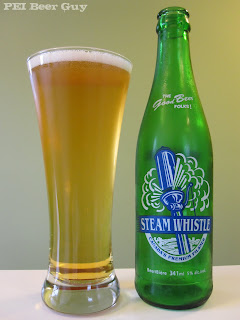 Taste-wise, it's more of the same - no surprises. Some grass / straw, maybe a bit of honey, and a hint of corn. Pretty clean and balanced.
Feel-wise, it is light and has a mostly dry finish. Carbonation is actually fairly light as well.
Overall, a solid pilsner - a great beer for a hot summer day or an evening out. It's not exactly going to get your thoughts flowing about all of its ins and outs, but that's not the point. It's just an accessible beer for anyone to enjoy without any fuss, bells, or whistles... OK, maybe just a steam whistle.
As a side note, if you like that shnazzy bottle opener in the first pic, it's available at Steam Whistle's online store. It comes with screws to mount it on a wall, and it also comes with some uber-strong magnets to help stick it to your beer fridge. The cap bucket is also held on by magnets.
pilsner Steam Whistle