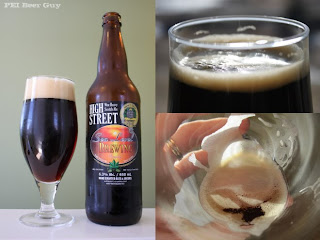 This is my third of my first four brews from Sea Level Brewing, purchased from Bishop's Cellar. I was pretty pleased with the Blue Heron ESB, but a bit disappointed with the Rojo Mojo Red Ale. So, I wasn't sure what kind of quality I'd get out of this bottle.This one is a special seasonal brew. Let's crack 'er open!
The cap basically fell off when I went to pry it open - not a good start. But, everything after the fact sounded, smelled, and looked normal. The beer itself poured out a clear, dark brown. In the glass, it's nearly black in the shade... in the light, it appears to be something between an ESB and a stout, colour and transparency-wise. That's about where a scotch ale / wee heavy should be, I reckon. The head was a nice surprise - fairly tall and creamy, with a good deal of staying power. Some slow, but ample carbonation in the glass keeps it going. There's lots of pretty solid lacing all the way down.
Smell-wise... not too much going on. I get some "standard" aromas for the style - light roasted notes and a bit of caramel or toffee. Some lighter, fruitier aromas come out as it warms, instead of anything earthy, peaty, or woody.
Taste-wise... pretty nice! Oddly, the comparison to the ESB / stout in colour carries through to the taste, too. It reminds me a bit of the flavour of the Red Racer ESB I had - just slightly acidic or sour... almost fruity. More dominant, though, are the other flavours - mostly roasted malt with a bit of that caramel / toffee coming through. A little chocolate, and some faint thoughts of coffee. Taste-wise, it's like you think it might be... not heavy, but "wee heavy"... like a light stout, or a thin porter. It's pretty good, and suits the style.
Feel-wise, it's fully medium - nothing too light or heavy about it. It's fairly smooth and gets much more so as it warms up. By the time the last of the bottle is being drank, it is so smooth. There's a light tingle from the carbonation, but the rest of it is just as silky smooth as milk. Its bitterness gives a bit of a dry feeling in the finish, but overall, especially by the end, it's more slick and a little sticky.
Overall, I like this one. It's a tasty, solid brew. There's nothing challenging about it, and that's alright - there's nothing wrong with it either! Easy to enjoy, and pretty tasty.
Scotch Ale Sea Level Brewing Company Wee Heavy