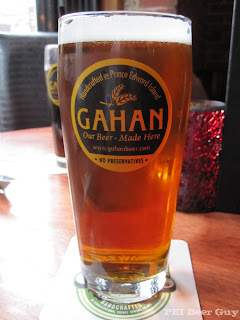 Tonight, my Mrs. and I ventured to The Gahan House to sample their entry in the PEI Burger Love promotion, the "Holy Cow" burger. Long story short, it was the best of the three that I've had so far, and two dollars cheaper. Can't go too wrong when you put panko-crusted fried pickles, chorizo sausage into the beef, bacon, lettuce, tomato, roasted red peppers, chipotle ketchup and tomoato mayo into a cornmeal bun. Alright. Enough about the burger. Time to move along to the meat of this post (ba-dum-bum).
This 1772 IPA was a nice rosy-orange colour, with a bit of creamy-looking head on top. A ring of lace was left at the top, with no real lacing anywhere else.
In the smell... not too much in the way of hops. This is more of a Brit-style IPA... more malty. Most of the smell was malt, a bit of nut, cream, and to be honest, something like sourdough bread or sour milk.
The body was fairly light, and it had a dry finish (wrongly advertised as very bitter). The carbonation was also fairly light, but had a nice little lifting effect in the mouth.
Flavour-wise, it reminded me a bit of their cream ale. It was malty, but not really sweet. There was some (I'm stretching, here) citrus/orange, but it's pretty light and mellow. Again, to be honest, the burps had more citrus/floral hop notes than the beer itself.
Overall, a decent beer. I wish it was more in the style of an American pale ale / IPA (more hops, please), but it went well with supper at least.
India Pale Ale The Gahan House