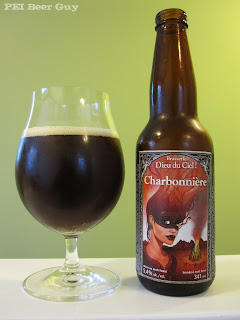 This bottle of Charbonnière (French for something like "coal" or "the area of charcoal burning") is only the second smoked
beer (not a traditional rauchbier) I have had the chance to try. The first one, from Rogue, got to be a bit much by the end of the bomber. It was cool, but it was just too much campfire and beans in beer form for one sitting.
This one pours darker than that counterpart; a very dark brown with sediment set a-swirling by the carbonation. Some lighter hues of reddish-orange manage to peek through its murkiness, under a thin head that didn't want to stay for too long.
In the smell is a lot of smoke. It's not off-putting, but it's pretty strong. Underneath or alongside are aromas of glazed ham, malty sweetness, charred wood, wet wood, and maybe a bit of peat.
Taste-wise, it's lighter (and perhaps more easily quaffable) than my prior smoke ale experience. There's a bit of watery sweetness up the middle of the tongue that's nearly like a cola. Out the nose, it's great (the exhale, not actually snorting the stuff out) - smooth, smoky, savoury. In the mouth, though, it disappoints a bit. Mostly only lighter things register like those cola notions - maybe some beans and something lightly caramel-like. This lightness in the mouth makes it pretty easy to drink, while still getting the nice smoked notes / effects, but it seems like my mouth is missing whatever's going on in the aromatic exhale party upstairs.
Feel-wise, it could be a bit more robust. The carbonation is OK, and the finish is fine (just a tad bit sticky), but it feels, to me, to be a bit too watery. I would like it more, I think, if it were a bit more viscous and smooth in the mouth.
Overall, a cool beer. Not exactly smokin', but nice and memorable enough to go back to at a later time if I'm in the mood for something like this.
Dieu Du Ciel smoked beer