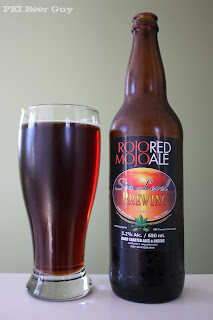 My first brew from Sea Level Brewing went well, so I'm hoping this one will be, too (although I was warned their bottled products can be inconsistent).
I popped the top off this one, and I think it poured with fewer bubbles than my well water. I never like that. A partial skim of lasting white is all there is. When I poured the rest of the bottle out, in a really hard pour, I got a finger+ of some creamy-looking head. Unfortunately, I got some sediment, too. Now, I don't usually mind sediment at all. This stuff, though, came out in some pretty big lumps that had a jiggly, jelly-like consistency to them. Some of them just wouldn't sink to the bottom, either. Just wiggling the glass in your hand made them look like little flatworms or something. Gross. I (almost) couldn't drink the rest. Other than that, the beer itself is clear, and the colour is a very deep chestnut red. There is some sparse webby lacing on one side of the glass as the beer lowers.
At first, the smell reminded me of the Storm Irish Red I had from Newfoundland a few months ago (uh-oh), with some differences. The aroma is a combination of smells... a somewhat light "roasted earthiness", sweet brown sugar or toffee-like smells, and just a hint of fruity hops, perhaps.
As for flavour, I'm braced for the same disappointment from the one (must have just been a bad one... I hope) Storm Irish Red I had... I'm expecting stale smoke and veggie flavours. Well, it's not that bad. I'm not won over by it, but it's not terrible, either. It's got a mix of flavours... caramel sweetness with a bit of a bready character to it. There's an earthiness... nearing peat flavours... at the end of the sip and on the exhale especially.
The killer for this beer, for me, is the feel. I find it much too flat. I don't want a billowing head, but I would like some carbonation here to lift aromas, brighten the feel, and add to the beer overall. It's just too flat. If it was meant to have low carbonation, that's too bad, because it's not helping matters. There is a bit of a bitter finish to it. Overall, the body is medium and the feel is a bit slick (a quality I don't relish in a red).
So, overall, this is a beer I'd try at the brewery / Port Pub, but I don't think I'd ever pick it up in bottled form again. There is really nothing overly good or bad about it. It's just fair.
red ale Sea Level Brewing Company