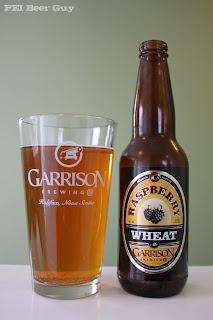 First drink in the new Garrison glass! Not the best glass for this beer, perhaps, but who cares? I'm not that much of a beer snob.

The beer is very clear, and has a golden colour, with a bit of depth to it (I swear it's reddish - suits the fruit!). There is next to no head. All that remains before drinking is just a ring of white with a flat cloud in the middle.

The aroma does, indeed, have a nice raspberry quality that isn't too strong. It reminds me of a dessert that uses raspberries sparingly - like raspberries and whipped cream or ice cream blended over a graham crumb base.

Hmm... pretty tasty. The raspberry ales I have had in the past have not won me over - they're often too sweet. This one is more restrained. At first, the flavour of each sip is 3/4 the raspberry - it has a sweet, yet light beginning. Once it's down the hatch, the raspberry fades, and the traits of the ale come through. There is some raspberry in the aftertaste, but it has more of an aftertaste of a pale ale or lager - malty & mellow.

The carbonation is fairly crisp. If anything, it may be a little undercarbonated, but it borders on being just right. Too much in a beer like this, and it'd come off feeling too light and girly. Too low, and it would fall flat. It's just about right. The body is fairly light, and the finish is rather dry.

Overall, a well-done raspberry beer. I could see this one going down easily on the deck in the summer - maybe with some fish & a salad.