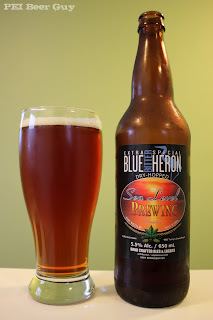 This is my first-ever beer from the Port Pub / Sea Level Brewing in Port Williams, Nova Scotia. I've heard good things about it, but that the bottled stuff has not always come across well in the past. Still, when I was at Bishop's Cellar a couple of weeks ago, I couldn't resist getting the four offerings they had (more on the rest later, of course).
The beer has a deep amber colour (as it should!) - but still clear and bright. The head you see in the picture is from a hard pour, and that's all I could coax out of it. Once that fizzled, a little bit always stuck around, especially in the form of webby lacing on the glass. Carbonation in the glass is minimal and slow.
The smell is quite nice - a nice balance of pine and citrus, with the citrus being a mix of grapefruit and a bit of lime, actually. Other whiffs give a bit of orange. Whatever way you whiff it, it's bright and fresh. I don't really pick up any of the malt in the scent until it starts to warm up a bit. Even then, it's slight.
The taste is also very nice. Comparing it to other beers I have had, it's more like IPA's than ESB's in its dominant hop aromas and flavour. There's a lot of pith in the flavour. It's bitter (duh), with some flavours of grapefruit / citrus as well some smoother notes from the malt - just a bit of a caramel backbone.
The feel of it is a bit odd in one way; I find the carbonation almost completely skips the front of my tongue. It seems to focus where the bitterness hits, on the sides and a bit at the back. It's a little odd, as, at first, each sip feels a little flat, and then ramps up a bit. The body is on the light side of medium, and has a bit of a mixed finish - mostly dry up the middle, and stickier on the sides.
Overall, I was very pleased with this beer. It was fresh, tasty, and didn't really disappoint in any way. Well worth the $4.50 for a 650 mL bomber.
Extra Special Bitter Sea Level Brewing Company