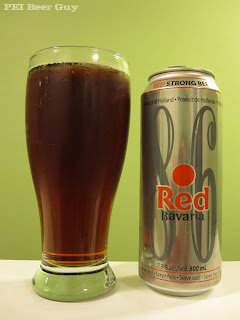 Despite the name on the can - the large 8.6 - this currently-available-on-PEI beer has an abv of "just" 7.9%. First of all, I should give the disclaimer here that I was given this beer by a friend, and its original blond cousin is, I think, the worst beer I have ever had. So... going into this one, I tried to keep an open mind but was prepared for the worst.

This beer has a very small head, but the colour, I thought, was actually quite nice. It has a nice, deep chestnut-red hue. During the pour I noticed that the beer had "legs" - it clung to the sides of the glass like a wine.

In the smell are some sweet, malty notes, corn, and a bit of alcohol. Some bready smells come out later as it warms up.

The flavour is not what I thought it would be. There is almost a sense of a light medicine... or a strong fruit drink, like a robust cherry something or other. It is way too sweet, or as many beer reviewers like to say, "cloying". A few sips of this was enough.

The feel was not what I expected, either. The carbonation level is fine, but this one feels like a runny gel or warmed-up, runny Jell-O. It coats the tongue and some of the inside of the mouth. It's sticky and rather gross. It reminded me of that scene in Anchorman where Steve Carell's character says, "I ate a big red candle."

I fully expected this to be the worst or next-to-worst beer I have ever had. It may not be the worst, but it's right up... or down... there. Ugh. Can't wait 'til it gives up its shelf space for something else!
Bavaria red ale