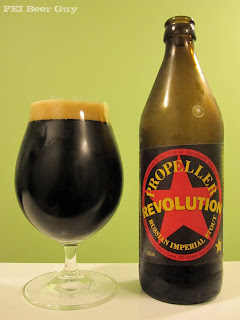 The night I wrote up this review, the windchill was about -33 degrees Celsius. Naturally, I thought, "Tonight'd be a good night to try a gut-warming 8% RIS."
This beer pours about as black as an 8-ball. There isn't much head to it - a finger's worth at the top, after a hard pour. It's a small-bubbled creamy brown. It doesn't stay that tall for very long.
When I first smell from the bottle, a bit of hops aroma comes out. Once in the glass, you can smell some chocolate (with some dark cherry notes... possibly from the alcohol), roasted coffee, and some oats.
The flavour is mostly chocolate... like a dark chocolate mousse with a roasted coffee finish that has the bitterness of a mild IPA. Rather nice. Quite nice, in fact, that the 8% is hidden well, and that there's nothing in it so sharp or sweet as to make it difficult to drink. You could down a bunch of this right before you go down (unexpectedly to you) on the floor.
This one feels pretty good, actually... the bitterness is mild enough that it doesn't overpower the aftertaste of coffee... it calls you back for more, rather than making you think about taking a smaller sip the next time. It might be a little light body-wise, but that's part of what helps to make it so drinkable. It's more than medium in body, and the finish is just a bit sticky.
Overall, I was really pleased with this one. I was braced for a sipper, maybe something that would be unbalanced... what I got was a well-balanced RIS. A little light, but tasty, and easy to drink.
Propeller Brewery Russian Imperial Stout stout