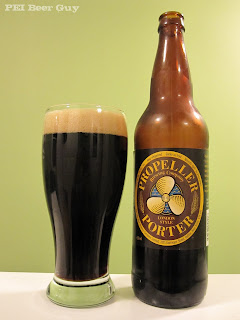 The porter style of beer was created in London around 1700, and is considered the world's first industrialized beer (hence the name). I first had this beer a while ago, but I decided it was time to revisit it for a new review & pic.

After an aggressive pour, the head is decent, albeit short-lived. It leaves next to no lacing on the way down. The beer is a very dark brown, with chestnut highlights around the edges.

It has a strong aroma - dark coffee, dark chocolate... it's a rich, roasted, and slightly sweet smell.

It tastes like a beer that has a higher alcohol content than 5%. There are traits about it that almost remind me of a stout or milk stout... sweetness, bitterness, almost a fruity tart quality.

The BJCP and World Beer Cup divide porters into two categories: "robust" and "medium". This would definitely be in the latter. For how it tastes and smells, I expect something with more body to it. The mouthfeel on this is fine, but thinner than I think it should be... or wanted it to be, I suppose. On the plus side, that makes it fairly sessionable.