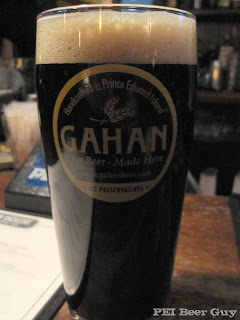 A couple of weeks ago, fellow BeerAdvocate and BrewNosers member Chris was over on the Island for some work. I wish there were more options for new beer when he comes (or any time for that matter), but, oh well... maybe in time another one or two will sprout. Hopefully this blog can help with that...
At any rate, we went to the Gahan House, as it's the best place on PEI for a variety of craft beers. The quality varies between flavours / beers, but they do have some good stuff. News to me (due to the Island/Canadian tradition of ignoring things at your own back door) was the fact that the Gahan does seasonal brews. Awesome. Not so awesome was back in December when their "seasonal" was what was left from the summer.
When Chris and I went this time, they had a Black IPA. I was pretty stoked when our bartender (labelled as a hobbit by a patron on a previous visit) said this. I had just had Garrison's, plus the INK'D at the Hart and Thistle, and loved them both. I was ready.
Longer story short, I was not impressed. The two glasses of Black IPA that Chris and I first got smelled and tasted completely different (first pours of the day, at around 8 or 9). It was either a dry-hopped version of their dark ale or stout, we thought. It didn't smell hoppy enough to be a blend of their 1772 IPA and one of their dark beers. In short, I did not like it, and it even made me feel a little cruddy the next morning, I think. The smell was very much like bubble gum (at least mine was), and the finish was akin to chalk. I would try it again, just in hopes that it was a couple of bad examples, but my hopes won't be too high.
Still... keep it up, Gahan. I'm glad you're mixing things up a bit!
Black IPA The Gahan House