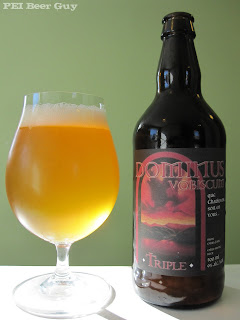 This one has been in my basement for about a month, and I've been waiting to try it. Wait no more!
It pours a lively, bubbly, clear, golden colour. The head is pretty good on it at first, and lowers to a few millimeters within a short time. The active bubbles maintain that height, though. The lacing is spotty, but also so heavy that it keeps falling down after you have a sip.
In the aroma is spice, yeast, and fruit - mostly
apple (maybe some hints of mango or banana if you're looking for them).
The taste... reminds me of a couple of Unibroue beers I have had... almost a cross between La Fin du Monde (same style) and Blanche de Chambly (a witbier). This style, the triple, used to be low on my scale of styles, but I have warmed up to it more and more (perhaps that's just the 9% abv). This triple tastes of some dough & yeast, and the fruity notes as mentioned above. Traces of spice are more hidden than in the smell. The alcohol is completely hidden.
The body is almost a little heavy for the flavour... let me rephrase that. It's heavier than you think it might be. It is very smooth, with a creamy feel and finish. From the appearance, you would expect it to be light and fresh, but it's very mellow and slick. The carbonation is just right - you get a tingle on the way in, and once it's down, everything just feels smooth (not to mention how your cheeks start to warm up).
This is a very good an excellent beer. It grew on me more and more as I drank it. It is expertly balanced, tasty, and with a hidden abv of 9%, somewhat dangerous! That La Trappe in my basement may not last very long after all...