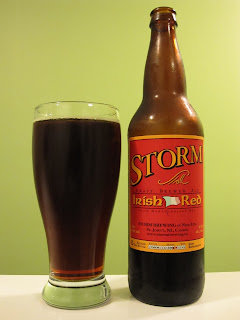 This is one of the brews brought to PEI for my by my new acquaintance in beer, Chris. This beer from Newfoundland's Storm Brewing Company is my first made-in-NL beer.
First off, the cap came off so easily it had me worried. The beer came here horizontally, though, and didn't leak, so it must be OK. It is marked as being brewed in the first week of December.
My first few impressions look-wise? It's dark. The carbonation forms and acts just like pop fizz (and vanishes just as fast)... it's not enticing to me when the fizz acts like that... makes me think of my first homebrewed red (which was a failure). The deep dark red has me interested, though, so my initial thoughts are neutral, I guess.
The smell is quite nice. It's smokey, and sweet / malty. There's notes of mellow honey / chocolate. It doesn't smell like a weak red. It smells pretty enticing. Almost like some stouts.
The taste is different compared to most reds I've drank, and I'm not so sure I like it. It has that smokey note (kind of like stale smoke in a bar), and something vegetal... like it was based on beans or something. There isn't much of a lasting aftertaste.
The feel is not very good. It could have gone one of two ways, based on how the fizz acted: really aggressively fizzy or flat. It's mostly flat. And rather watery. Disappointing. If the feel was better, it might have upped this beer to being really good.
Overall, this beer has some promise in its flavour, and especially its smell. Maybe it would be good on tap. Is it is, though, the slack, thin feel - like flat draft - holds it back, and leaves it somewhere below par.
Storm Brewing Company