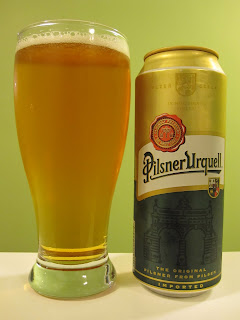 This beer is the beer that lends the pilsener/pilsner style its name. A style being named after one beer? Surely, it must be stellar.

It's dark gold in colour. It has a finger of head that reduces to a ring with some film in the center. Eventually, there is no head. It's clear and bubbly.

The smell is a bit malty, actually. I get a bit of sponge toffee. Honey, grains, and fruits like apricots and plums are also present. There's a questionable whiff of rice there.

I find it a bit too bitter for the style. That's just my opinion, or what I expect / what I'm used to, though. It's fairly highly carbonated and leaves the mouth dry.

Overall, it's OK. There are some nice things about it. It's fuller in flavour than other pilseners, but I found it to taste a bit cheap.
pilsner