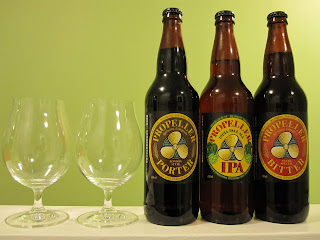 First off, I wanted to find myself some nice, stemmed glasses, preferably something close to a tulip / snifter. I chose this pair of Spiegelau glasses for $20 at Liquid in Halifax. I also got some bombers (650 ml) of Propeller's Porter, IPA, and Extra Special Bitter. 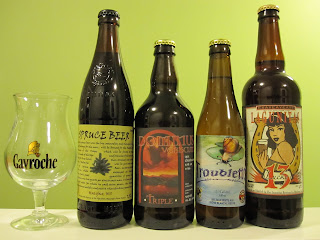 In a previous trip to Halifax, I got a bottle of Gavroche I hadn't drank yet. When I noticed the glass at Premier Wine & Spirits for $3.99, it was a no-brainer. Next up is Garrison's "sold out in two days" Spruce Beer. Luckily, a very helpful Chris managed to find me a bottle after the fact. Many thanks to him for this. Then, there's Dominus Vobiscum Triple by the Microbrasserie Charlevoix, a Caracole Troublette, and a Lagunitas Lucky 13 Mondo Large Red Ale. 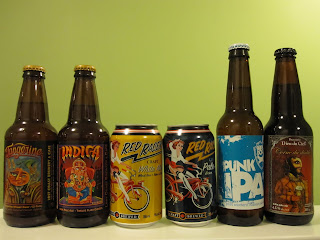