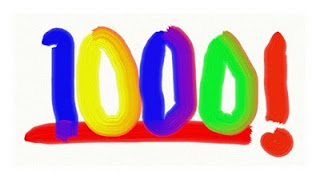 Last night, less than four months after I started my modest little beer site... it remains a modest little beer site. BUT it also got its 1,000th visit.
How did it all go down? Well...
My 1,000th visitor visited from (well, through, at least) Charlottetown. They rolled in on an iPhone at 11:25 (and 13 seconds) PM, and stayed for one minute and 21 seconds, viewing three pages. They came in by, and left from, the winter beer post. I have it narrowed down to three people, and have a strong hunch as to who #1,000 was (this can be done on PEI). Thanks, #1,000. Hope to see you again in another 1,000!
PS - the image was made with a neat little art program called ArtRage. It's cool, especially on a touch-enabled device (finger painting!).