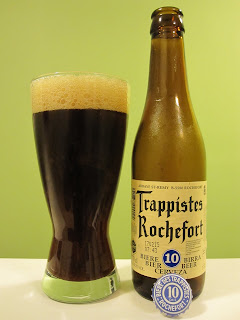 This deservedly-renowned beer has a rich, dark colour. It pours with a little viscosity. The head forms quickly... it needs a slow, easy pour. Suprisingly, since it starts out like beaten egg whites, the also-pop-like head is gone before I can have a sip, and leaves no lacing. The sediment / yeast is nearly black! I didn't think it would be so dark.
In the smell is... root beer is what I actually get first! Cinnamon rolls, molasses, orange, an almost minty smell, and some chocolate. There's an awful lot going on in there.
The flavour? Wow. Information overload! It's so complex, I don't know where to start. It's earthy. The exhale is nice. There is a strong taste of figs / dates, and still a bit of root beer (that sweetness coming out). It's slightly woody, maybe even walnutty, in a way, with a blood orange aftertaste... almost gets a bit tart as it nears its end... similar to a mincemeat or raisin tart.
The fizz feels a bit strong at first... it seems you can feel it go down your throat, but that's probably the 11.3% alcohol it has in it, although the taste of it never really enters into your mind. It's smooth overall, with a bit of a viscous finish.
Overall, it's a sipper, and a great one at that. It's very complex, but not so rich or dense as to put you off it.
Rochefort Trappist