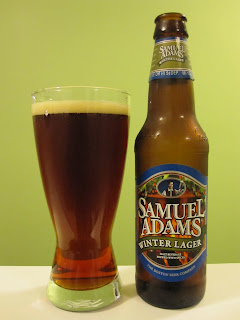 This is the first of a few beers brought to me from Newfoundland by a new friend in beer, Chris, known on beeradvocate as "cjbmacdon". Thanks!
The beer really reminds me of some Oktoberfest lagers. It had a nice reddish-brown colour. It's quite bright and clear, and has next to no head.
The smell has a bit of roasted toffee in it... I think there's a bit of warmed-up apple in there, too.
The taste? It's a bit different than I thought it would be after the smell and look. It's quite a bright flavour... at first, it's this hit of tangy, fruity hops, with some spice. It's like a bit of cinnamon in the background (maybe even some clove or other spices), with some apple... almost like chilled apple cider in some ways. Then, after you swallow, these sweet malt characteristics some out, like a bit of roasted toffee... it's more sweet than bitter, and more malt than hops. The spice and sweetness come out in the aftertaste, almost like you ate a bit of apple crisp a while earlier.
The feel is great. It's bright and fizzy in the mouth, smooth, slick, and not watery. Very refreshing.
Overall, quite a nice little lager. I enjoy these winter and fall lagers so much more (on the whole) than run-of-the-mill lagers. There's so much more flavour and depth to them, without them getting so complex that they overwhelm you. A great beer to just sit and drink on the holidays. Now... how come they can get this in Newfoundland and not in PEI? We're so much closer!