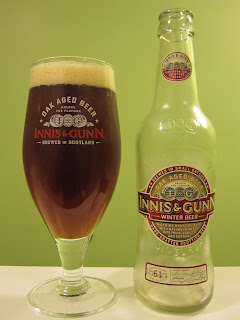 Innis & Gunn's original beer was one of my first favourite beers when I started to branch off from the bland world of the big beer companies. So, I sometimes feel that I have to make sure I am not biased when I talk about their stuff. This winter beer, never available before, is the third beer of my Innis & Gunn holiday pack. I have read some pretty good reviews of this beer, so my hopes are pretty high.
Well, to start, it has a bit more head than other I&G beers, at least at first. It's darker than their original beer, with more of a deep red quality to it... kind of a deep honey / amber colour. There's no traces of head left on the glass as you drink.
It smells like an I&G product... vanilla, sweet butterscotch/caramel, slight hint of wood... a bit of pastry (like the cup of a raisin tart)?
The taste has just a bit of a metallic quality to it. I really don't taste much difference between this and a regular Innis & Gunn. The stronger alcohol content of this comes out only slightly as the glass wears on. A bit of fruit in the flavour comes out as it warms up as well (cranberry?).
The feel is a bit disappointing. It's watery. I was expecting something more full and robust.
Overall, I was underwhelmed, if that's a word (actually, I know it's not, 'cause Chris Murphy looked it up... it's one of those skills he learned in his school). It's a good beer, but... not significantly different enough from their original beer to make it special. I like the fact that there are common I&G threads in all their beers, but, at the same time... those common threads are starting, to me, make them feel "common".
Innis and Gunn Winter Beer