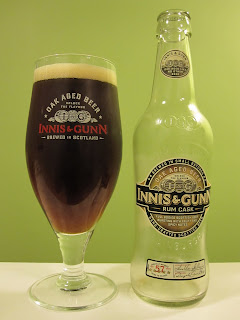 Let me just start by saying I have been coveting and waiting to try this beer for some time. I like Innis & Gunn's stuff in general, and when I heard they were doing a rum cask beer (that I couldn't get), I really wanted it. I was quite happy to find out that it would be included in a holiday pack available on the mainland this fall. Thankfully I have a helpful sister-in-law over there. ;)
It poured with a pretty nice head that didn't stay for long. The colour is great... like a deep stream... that full, honey-brown or light chestnut colour.
The smell is just what I thought it would be. It's exactly like Innis & Gunn's original beer, with some dark / demerara rum added to it... sweet & smooth scents of rum, toffee, and a bit of vanilla and wood.
The taste, at first, is more like a "regular" Innis & Gunn. The rum flavour starts coming out after a few sips. The rum flavour is fairly light. I wonder if that is because this brew was aged in barrels for 57 days as opposed to 107 when I&G first made this beer. I also wonder if that earlier version had a richer, fuller flavour. I found the flavour on this one to get a bit light as it wore on. It's a good sipping beer, though... almost makes you think you're sitting and sipping on a R & C instead.
I found the feel, honestly, to be a bit watery. The alcohol can be felt in the throat a bit, too. The carbonation is fine - it feels bright enough to be fresh, but light enough that you don't really feel any fizz. Overall, pretty smooth.
All things considered, this is a good beer. It's not the great one I wanted (and thought) it to be, but it's still an interesting brew. Now I am just curious about whether that 107-day-aged stuff was any better.
Innis and Gunn Rum