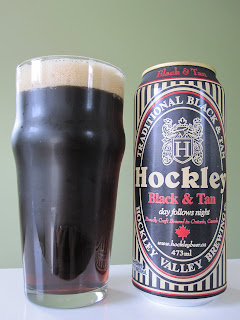 Today's offering to the Beer God (let's call him... Hopollo) is Hockley Black & Tan. I have had a couple of other offerings from Ontario's Hockley, namely their Dark (don't recall off the top of my head what I thought of it... decent, I think) and their Georgian Bay Dipper (which I do recall liking). Let's see what this one's like.

When pouring, it looks exactly like dark cola. Even the fizz, at the start. For some reason, I expected something thicker. The head isn't too tall, but looks creamy when done pouring. It doesn't stay around for long, and lacing is sparse.

A light whiff will give you a sweet malt-generated smell. A deep whiff gives more of a scent of wet pet hair. Mmmm... pet hair. As it warms up, it smells stronger - like a toffee liqueur with some bourbon or something.

The taste is pretty good. It's subtle, but has a few things going on: a bit of black licorice, some nut, a bit of coffee / vanilla. It reminds me a bit of Garrison's Nut Brown, but less nutty. I think the aftertaste and exhale are the best parts.

In the mouth, it feels fine. It's not too rich a feel for the subtle flavour, which is good. That keeps it drinkable. Although it's not very thick, it's not watery either. All in, carbonation included, it's a pretty nice balance.

Overall, a pretty drinkable beer. It would be easy to put a few of these back in a pub or on a deck. Or a couch.
Hockley