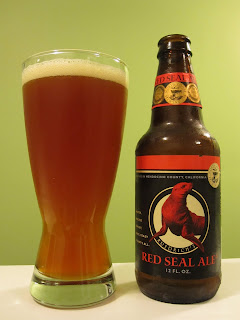 The golden-brown-orange colour reminds me of my beloved Red Racer IPA. The head clings to the glass a bit as it swirls during the pour. Not much head forms, and what does doesn't last long. It has only light lacing.

The smell is nice, but not strong. Fresh and citrus-y. Not too much of the pine and juniper notes from other hop-strong beers. Its subtlety is nice, but I would like something a bit stronger.

The taste is good, too, but like the smell, subtle. Refreshing. It has a bit of orange and/or grapefruit that comes out from the hops. The malt plays second fiddle, but it is there.

It's a little viscous in its feel... a little thick, which makes it smooth and, again, refreshing. It's not very bitter at all, which, with the subtlety of the rest of it, gives it a lack of punch. That subtlety makes it go down easily, though.

Overall, a good-tasting and well-balanced beer that is rather subtle in all its traits, making it easy to drink several of these at once, if you wanted to ("sessionable").