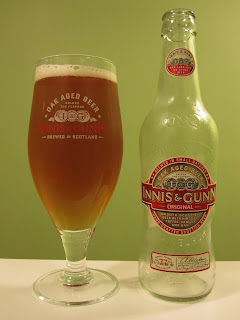 Even though this beer is available on PEI, I picked this one up (well, my sister-in-law did) as part of a holiday gift pack in New Brunswick, because we won't get the pack here on PEI. The box contains an Innis & Gunn glass (as you can see), a bottle of their original beer, a bottle of their Rum Cask beer (although I think it's not aged as long as the original), and a new "Winter Warmer", their strongest beer yet. Keep checking back for reviews on the latter two as the holidays approach.
Now, this beer is one of my favourites from my early days of trying out new brands and styles of beer. I've got an attachment to it. That being said, it has been a little while since I had one, and expected it to not live up to my memories. So... what did I think of it?
Well, it has the same nice amber colour, with only a small head. The head leaves a thin, creamy layer of itself on top. It's a very clear beer, with some random lacing (only on the side you drink from).
The smells are of muted vanilla, toffee/butterscotch... it's bright. Almost like a port; a bit of sweetness, like grapes or figs.
The taste is brighter than I remember, too, and sweeter. Maybe a bit too sweet. I do pick out a bit of the earthiness and the oak, but not as much as I remember from previous tastings. I miss that.
The feel of it is OK overall. Perhaps a bit watery.
The drinkability is still good, and, overall, so is the beer. Not as good as previous ones (at least according to my memory), but still worth a try if you've never had one.
Innis and Gunn Oak Aged Beer