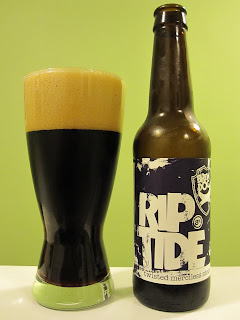 This BrewDog brew one said it'd be good 'til April 16th of 2012, but I couldn't resist tonight. I thought I deserved to try a little treat. Who knows when I'll crack and finally open this one.
Between the bottle and the glass, it has a kind of chestnut red colour. In the glass, it's deep and dark with bits of chestnut-coloured light on only a few edges. It has tons of head... I couldn't even pour the whole bottle out at once. The head slowly retreated, leaving big, creamy dimples and bubbles on top... like a half-done pancake in the pan. There was solid lacing the whole way down.
It has malty smells of date squares. It also had a bit of a hoppy / fruity smell... really, it's like someone took a bit of a strong IPA and mixed some of it in with this stout.
The flavour is nice. The 8% is almost completely buried in taste and feel. Most notes are standard stout ones... chocolate, coffee, molasses, and a bit of dough / bread. The slight alcohol and hoppy notes give it a tinge that's kind of like an IPA, kind of like a red wine.
The feel is not too thick, and not too watery. Just about right. The finish is sticky.
Overall, this is a very drinkable stout that has a unique trait or two. I wouldn't say it's exactly "merciless" or "twisted" (in a crazy sense) like the bottle says, but that's kind of what I expect from BrewDog; good, interesting beer that's well packaged and covered in all kinds of bravado and character.
BrewDog stout