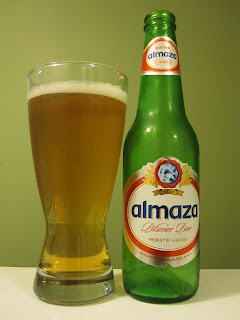 In my "drink as many different beers as I can" quest, I sometimes pick a beer up just because I have never had one from a particular place. This is one of those beers. It wasn't rated particularly well, but I had never had a beer from Lebanon before... plus, the chap at Premier was willing to pull one from a case for me, so how could I resist?

Overall, it's just an average beer in every way. Are there many green-bottled beers out there that aren't?

It was a clear, bright yellow colour. It had a respectable, decent, little head, but it didn't last long.

The smell... kind of skunky, no surprise (being in a green bottle). There is something a little hoppy or fruity about it, which is a plus... but it's pretty faint.

The taste... not so skunky, thankfully. Kind of refreshing (but faintly so, like the smell), kind of straw-like, kind of cardboard-like. Not as bad / cardboard-like as the Birra Morena I had a while back, though.

The mouthfeel of it was fine. Nothing stuck out as particularly bad or good.

This Almaza was not a struggle to put down, but the only reason to put one down is to say you've had a beer from Lebanon, or to have the bottle in your collection. (reviewed in, and saved since, September)