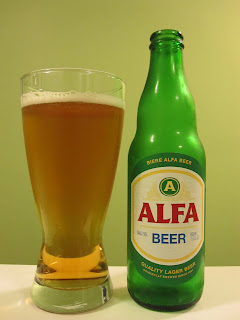 OK, so... my mind was pretty much made up about this one as soon as I laid eyes upon it. It was just going to be some run-of-the-mill "Euro-lager", probably just like every other plain pilsener and lager out there. I'll admit... the style(s) can be refreshing, but I don't find examples of them to be very interesting or different from one another.

This one is a Greek lager, the second beer I've had from Greece (as far as I can remember... the other one being Mythos). My wife recognized it as a new one at whatever
PEI LCC store she was in.

This one had a bit more head at first than I thought it would. It was pretty much all gone within seconds, though. The colour is as expected... pale, clear, & golden.

The smell is pretty much what I predicted... green bottle skunk, some malt / grain, corn, & maybe a bit of honey.

The taste... more of the same. A bit skunky, light malt flavour, some corn / rice, and something fresh... honey / wheat notes, I guess. A bit of an unpleasant aftertaste.

The feel is normal / average. Lightly carbonated, a bit watery, with a dry finish.

It's fairly drinkable, but why bother? I can't see why the local LCC would add such a beer (it must have good profit potential, ie, be cheap) to their listings. The only interesting trait of this Adjunct Lager From Away is that it's new-to-us and foreign.
Alfa Lager