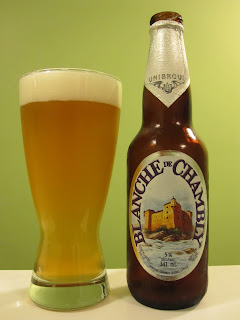 A few years back is when I really started to get into a wider variety of beers. On a trip to Quebec in particular, I saw, had, and purchased several... well, more than several, but less than a couple dozen... different brews in the province. One of the things I looked forward to most in Quebec, actually, was the Unibroue beers after I saw them in tourism information and looked them up online. Their Blanche de Chambly is one I had those years ago, and have revisited again, as it is the lone Unibroue beer available in my province so far.

The look is OK, standard witbier appearance; a slightly hazy, flat yellow. There would have been more head had I used a different or taller glass. As it stood, the head was good anyway. It receded to a fluffy skim that left solid patches of lacing on the sides of the glass.

The nose is more subtle than I expected this time, and not that enticing. I expected / wanted banana and spice, and just got cloves/spices and... rubber? Something very faint like that, anyway.

The taste, thankfully, has more oomph. I like it more this time than the first time I tried it (not that much). I get biscuit with nutmeg, and a hint of banana.

The feel is creamy and smooth, but with a bit of a watery fee in the finish, maybe due to the alcohol.

It's a good example of the witbier style. Compared to a similar style, like a hefeweizen or a weissbier, I like it more than a König Ludwig Weißbier, but not as much as a Weihenstephaner.